Want to hang with Hayson and get a free book? Subscribe 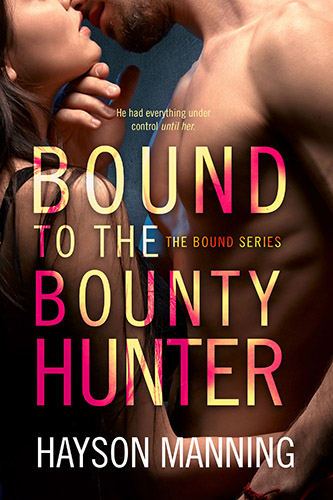 Bound to the Bounty Hunter

She’s trying to set things right. He’s working to keep her alive. Under the gun, will they find safety in each other’s arms?

Sophie Callaghan won’t rest until she’s paid back every single person her father conned. While on a case involving a Russian billionaire, the determined PI stumbles into something much more complex than she could have ever dreamed. But when her cover is blown at a Colorado sex club, the sexy, off-limits man who saves her leaves her breathless.

Bounty hunter Harlan Franco never mixes business with pleasure. But his latest assignment has him protecting a gorgeous private eye with a butt that won’t quit and a mouth that won’t stop. When he discovers she’s investigating his employer, he worries his attraction may turn fatal.

Though she refuses to be just another notch on his belt, Sophie allows Harlan to move in to protect her from mercenaries hot on her tail. As the space between them fills with smoldering heat, Harlan fears surrendering to his desires might mean the delectable woman will uncover the real reason he’s guarding her.

Can these two opposites keep their passion fiery hot, or will the truth put them on ice?

Bound to the Bounty Hunter is the first book in the thrilling Bound to the Brotherhood series. If you like sassy heroines, broody heroes, and steamy secrets, then you’ll adore Hayson Manning’s scintillating story.